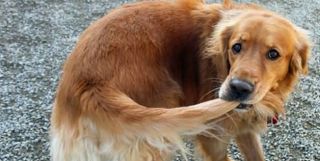 Tail chasing is a classic fun behavior for many dogs. Being confined to a small cage where movement is restricted and boredom, especially in older dogs; is the most common reason for this behavior. I recall one patient whose tail was injured and we had to remove part of it. This injury caused a neuritis commonly known as phantom pains, and he chased his tail. Grooming has also been known to cause tail chasing and it's theorized that the dog just doesn't recognize it. The presence of fleas or irritated anal glands is also associated with this behavior. It can be an attention getting habit or may develop into a compulsive behavior, like OCD in people. It is theorized that it causes an increased level of endorphins which reinforce the behavior with feelings of pleasure. I recall a trained police dog that did this constantly after being retired. In his case I recommended he be treated with an anti-obsessive medication such as Prozac. Hereditary especially in some breeds including German shepherds, Australian cattle dogs and bull terriers has also been implicated. Amazingly high cholesterol, suggested by veterinarian Marty Becker, could block the flow of brain hormones, which controls mood and behavior. More exercise is the treatment in this case as well. And finally in pups not knowing why the tail is there to begin with! This body part is fascinating, especially if he has no other playmates.